The 2022 MBC Gayo Daejejeon, held on December 31 ended with splendor! Special stages and collabs at the much-anticipated festival surely made the end of the year filled with beautiful music performed by top artists.

The annual year-end music festival gathered about 37 top K-pop idols and musicians from all generations under the theme, “With Love,” completing a special event that cannot be seen anywhere.

To commence the ceremony, 2PM Lee Junho and SNSD YoonA, who met again following last year as MCs, doubled the excitement by showcasing a joint stage that made viewers’ feel “Love Never Felt So Good.” Contrary to their sexy rendition of “Señorita” in 2021, the duo showcased a refreshing Michael Jackson dance cover wearing pink suits.

Following them, MC Jang Sung Kyu also collaborated with Koyote and CLASS:y, featuring on Young Tak’s stage, which raised the atmosphere to its peak.

Following 2022, the new stage that will shine in 2023 also created satisfaction.

CLASS:y, TEMPEST, and Kep1er also proved why they are artists to look forward to this 2023, thanks to their eye-catching solo stages and collab.

Speaking of collaborations, Younha x NCT Taeil & Haechan were among the artists that bridged beyond genre and generation with their stage of “Password 468.”

The “Illusion” + “Girls” stages of aespa also became a hot topic after Karina, who suffered from her boot’s sole being torn off, completed the performance without any sign of discomfort.

Although fans were concerned about her foot, MYs lauded her professionalism that didn’t waver despite the wardrobe malfunction.

Throughout the show, numerous artists continued to deliver amazing performances, including NCT 127 (DOYOUNG, JAEHYUN and JUNGWOO) ATEEZ, ITZY, Stray Kids, Monsta X, THE BOYZ, MAMAMOO, (G)I-DLE, Weki Meki, Oh My Girl, NMIXX, NCT Dream, and more that provided fresh fun with a stage that had never been presented in Korea. 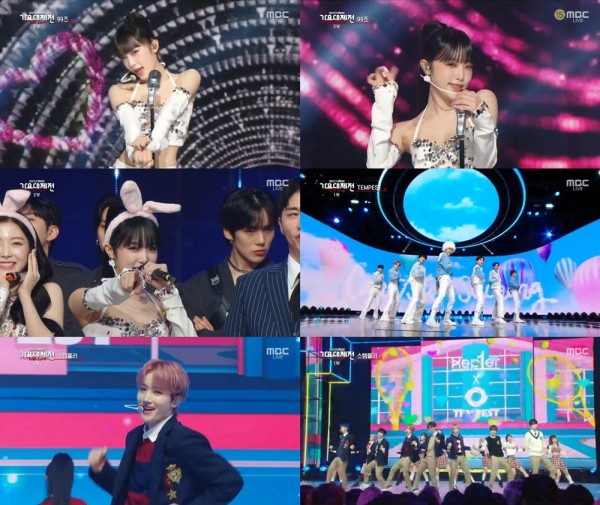 As the show bid farewell to 2022 and welcome 2023 “with love,” the New Year’s resolutions and greetings of the “Year of the Rabbit”-born idols were heard.

“I will take responsibility for the year 2023 and protect your happiness. Please look forward to an upgraded version of myself.”

“I’m preparing to show a lot of deadly performances today. I will create more opportunities to meet more fans.”

What’s your favorite moment from the MBC Gayo Daejejeon 2022? Tell us in the comments!