“TWICE is crazy for doing this…” Following the release of “Between 1&2” opening trailer, the nine-member girl group became a hot topic for THIS reason.

On August 9, JYP Entertainment released the opening trailer video for TWICE’s 11th mini-album, “BETWEEN 1&2.” In the video, TWICE members appeared with the voices, saying, “Who are we?”

Nayeon, Dahyun and Jeongyeon were featured when the word “pathfinder” flashed, while Sana, Jihyo and Chaeyoung were shown when “archive” appeared.

Lastly, Mina, Tzuyu and Momo were assigned to the word “cryptography.”

It seems like the group was located in a secret hideout space where they were divided into three units: the activist, collector, and decoder, respectively.

TWICE then showed their great acting and dancing skills, following the concept of finding clues and unlocking codes to find answers.

Following the clip’s release, it immediately piqued K-pop fans’ curiosity, especially ONCEs (TWICE’s fandom), about the kind of concept the team is preparing for their much-awaited return.

But looking at the 54-second clip, TWICE is expected to unleash their agent x spy sides, gaining more anticipation.

On top of the film-like concept, people also reacted to TWICE’s sexy ‘fits.

Contrary to their innocent and fresh visuals they showcased in the beginning of their career, TWICE members shocked everyone when they sported deep-cut tops, short bottoms, garter belts, and black stockings.

Fans are praising the nine members’ physiques, especially Jeongyeon. They emphasized that the “SCIENTIST” singers pulled off the daring concept, especially that the clothing is difficult to wear.

Meanwhile, “BETWEEN 1&2” will be released at 1 p.m. on August 26. Based on the trailer, the MV will contain a trendy reinterpretation of graphics, sounds, and kitsch sensibilities reminiscent of SF action movies.

It stimulates curiosity about what significant numbers, passwords, and images that appear in the middle of the video trailer will mean in connection with the new album’s title, “BETWEEN 1&.2”

On the same day, TWICE will also hold a live stream for fans who waited for their first comeback this year and will appear on the popular U.S. music program “MTV Fresh Out Live” to communicate with global viewers. 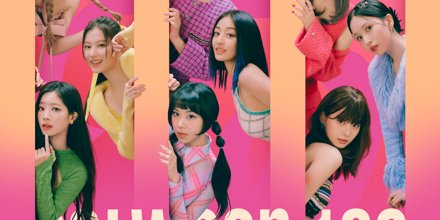 This album is special because it is the first time in nine months that all nine members will make a comeback together since their third full-length album “Formula of Love: O+T=<3” in November last year.

On top of that, this is also the first activity of the group after beating the “7-Year Curse.” This refers to the breakup or withdrawal of members in the seventh year when the exclusive contract period expires under the standard contract.

In July, TWICE announced that all its members will renew their contracts with JYP Entertainment, its agency, and carry out more diverse activities in the future.